Web function is a function type of cloud function. It is different from event function. By supporting native HTTP/WebSocket protocol, web function is compatible with any web service written by native web framework. Traditional projects can be deployed to functions to ensure the same experience as the local development service.

Since its launch in June 21, it has become very popular, and tens of thousands of traditional web projects have been easily migrated to functions, allowing old code to continue to shine on serverless infrastructure. However, as Web functions are applied in more scenarios, some problems are gradually exposed.

In most cases, request-single concurrency is a recommended mode, and there is no need to consider the typical concurrency problems caused by simultaneous processing of multiple requests when writing code, such as thread safety, blocking calls, exception handling, etc.

In web applications, typical business scenarios are IO-intensive—downstream services such as access to databases or interfaces of other systems within functions will spend more time waiting for responses from these downstream services. This kind of waiting is generally doing iowait and does not consume much CPU. At this time, the single-instance single-concurrency mode will cause two problems:

The waste of computing resources is especially prominent in the long connection of websocket;
The billing is slightly higher. Because each incoming request is allocated to a different instance for processing and billed separately, the overall cost has no advantage over traditional container or host solutions. 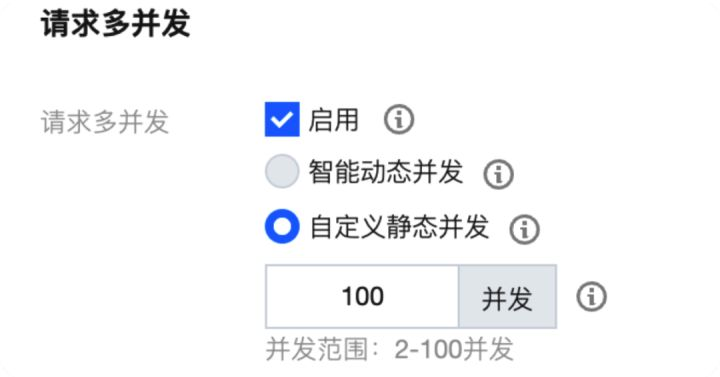 Multi-concurrency vs single-concurrency stress test results: the maximum request delay is reduced by 82.7%, and the cost is saved by 98.8%

Prepare a Web function in the Beijing region, simulate a request response time of 500ms, and configure the function to 512MB.

Multiple concurrent requests are not enabled: 60 instances are required, the maximum response time is 4177ms, and the billing memory time is 12500GBs

Client pressure test results: the maximum response time is 4177ms, and the average response time is 569ms. At the beginning of the stress test, the function received 100 concurrent requests, and immediately started to cold start to pull up the function instance. During the cold start process, the first batch of requests began to wait, and the longest response time was 4177ms, and as the instance was pulled up, the request was processed normally. , new concurrent requests will be immediately and evenly distributed to multiple instances for processing, so most subsequent requests have a small waiting time, and the overall average response time will be leveled and returned to normal levels.

Screenshot of function monitoring: 100 instances were pulled up instantly at the beginning of the cold start, and subsequent instances were rotated and reused, and the number was stable at 60 instances. The billing time is 0.5GB 0.5s 50000=12500GBs.

Enable multiple concurrent requests: only one instance is required, the maximum response time is 723ms, and the billing time is 150GBs

Client stress test results: the maximum response time is 723ms, and the average response time is 565ms. At the beginning of the stress test, the function received 100 concurrent requests and immediately started cold start to pull up the function instance. During the cold start process, the first batch of requests began to wait, and the longest response time was 723ms, and as the first instance was pulled Up, new concurrent requests will be immediately allocated to the instance for processing. The number of requests waiting for a cold start is significantly less than when multi-concurrency is not enabled.

Screenshot of function monitoring: concurrent requests come in, and all requests are assigned to a function instance for immediate processing.

Screenshot of function billing time memory: only one instance is needed. In multi-concurrency mode, requests allocated to the same instance for processing will only be calculated once, and the billing time is 0.5GB*282.728s=141GBs. Save 98.8% on fees.

When multiple concurrent requests are not enabled, a single function instance will only process one request at a time, and the next request will be processed only after the first request is processed. The billing time for memory time is the sum of the execution time of each request, as shown in the following figure shown:

It can be seen that in IO-intensive scenarios, such as the Websocket long connection service, the billing execution time can be reduced and costs can be saved.

Multiple concurrent requests can reuse the database connection pool in the same instance, reducing the pressure on downstream services.

When request concurrency is intensive, multiple requests only need one instance to process, and there is no need to pull up multiple instances, thereby reducing the probability of instance cold start and reducing response delay.