The Meituan database platform R&D team is facing the increasingly urgent need for database anomaly detection. In order to discover, locate and stop losses more quickly and intelligently, we have developed a database anomaly detection service based on AI algorithms. This article introduces some of our practices and thinking from the dimensions of feature analysis, algorithm selection, model training and real-time detection, hoping to bring some inspiration or help to students engaged in related work.

The database is widely used in the core business scenarios of Meituan, which requires high stability and has a very low tolerance for exceptions. Therefore, rapid database anomaly detection, positioning and stop loss becomes more and more important. For the problem of abnormal monitoring, the traditional fixed threshold alarm method needs to rely on expert experience for rule configuration, and cannot flexibly and dynamically adjust the threshold value according to different business scenarios, which can easily turn a small problem into a major fault.

The AI-based database anomaly detection capability can perform 7 * 24-hour inspections on key indicators based on the historical performance of the database. It can detect risks in the budding state of anomalies, expose anomalies earlier, and assist R&D personnel before problems worsen. Make positioning and stop loss. Based on these factors, the Meituan database platform R&D team decided to develop a database anomaly detection service system. Next, this article will explain some of our thinking and practice from several dimensions such as feature analysis, algorithm selection, model training and real-time detection.

2.1 Find out the changing law of data

Before the specific development and coding, there is a very important task, which is to find the change law of time series data from the existing historical monitoring indicators, so as to select the appropriate algorithm according to the characteristics of the data distribution. The following are some representative indicator distribution charts that we have selected from historical data:

From the above figure, we can see that the law of the data mainly presents three states: periodic, drift and stationary [1] . Therefore, we can model the samples of these common features in the early stage, which can cover most scenarios. Next, we analyze from the three perspectives of periodicity, drift and stationarity, and discuss the process of algorithm design.

The specific process is as follows: 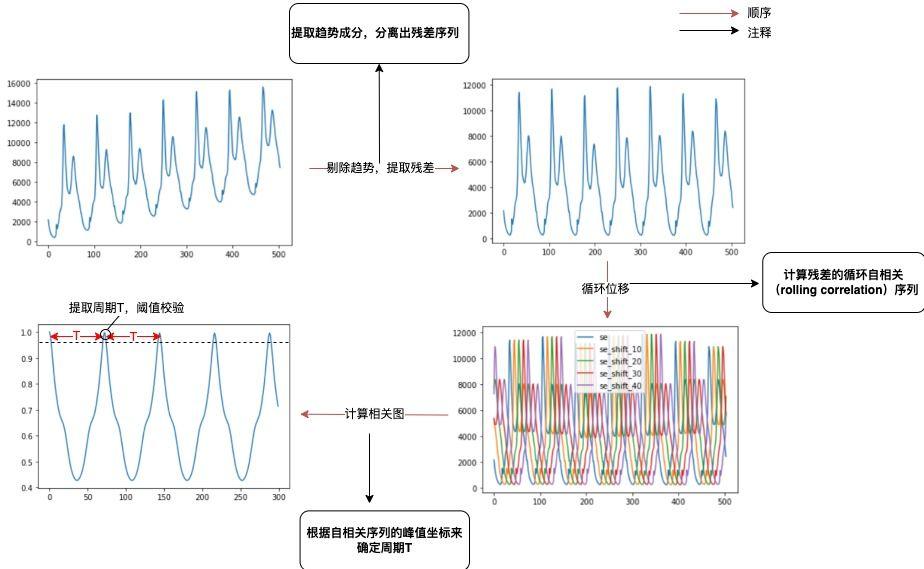 For the sequence to be modeled, it is usually required that it does not have an obvious long-term trend or has a global drift phenomenon, otherwise the generated model usually cannot well adapt to the latest trend of the indicator [2] . We refer to the cases where the time series has a significant change in the mean value over time or there is a global abrupt point, which is collectively referred to as a drift scenario. In order to accurately capture the latest trend of the time series, we need to judge whether there is drift in the historical data in the early stage of modeling. Global drift and periodic series mean shift, as shown in the following example: 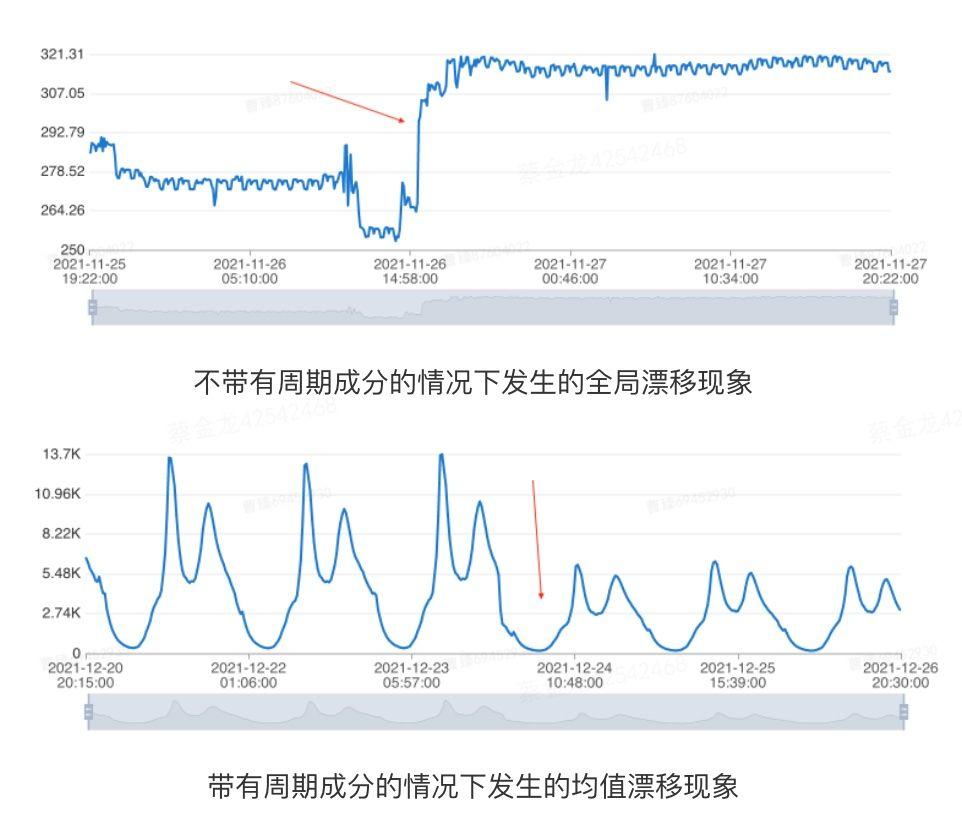 Database metrics are affected by complex factors such as business activities, and many data have aperiodic changes, and modeling needs to tolerate these changes. Therefore, different from the classical change point detection problem, in the anomaly detection scenario, we only need to detect the historically stable situation, and then the data drift occurs. Comprehensive algorithm performance and actual performance, we use the drift detection method based on median filtering, the main process includes the following links:

For a time series indicator, if its properties do not change with the observation time at any time, we consider this time series to be stationary. Therefore, for time series with long-term trend components or periodic components, they are not stationary. A specific example is shown in the following figure: 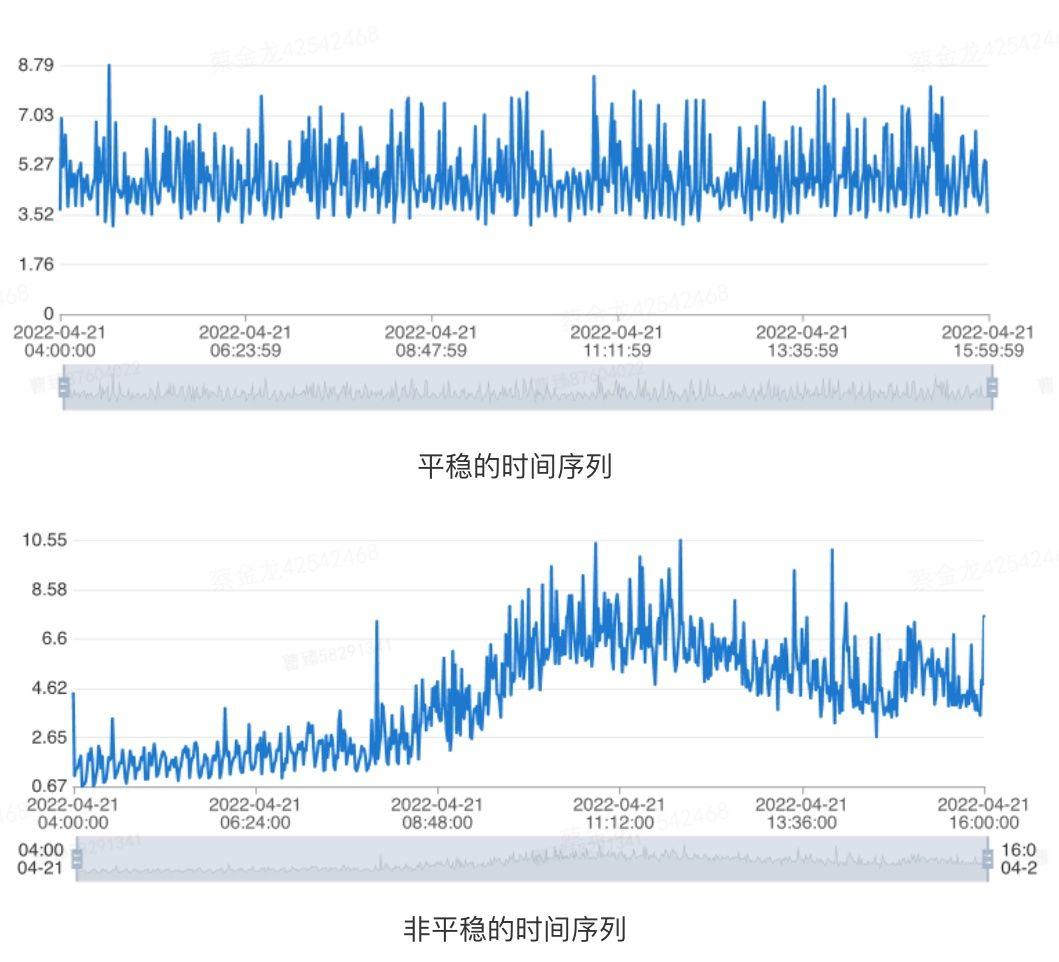 In view of this situation, we can use the unit root test (Augmented Dickey-Fuller Test) [3] to judge whether a given time series is stationary. Specifically, for the historical data of a given time range indicator, we believe that the time series is stable when the following conditions are met at the same time:

By understanding the product introductions published by some well-known companies in the industry on time series data anomaly detection, plus our historical accumulated experience, and sampling analysis of some online actual indicators, their probability density functions conform to the following distributions:

For the above distributions, we investigate some common algorithms and identify boxplots, absolute medians, and extreme value theory as the final anomaly detection algorithms. The following is a comparison table of algorithms for common time series data detection:

The main reason we did not choose 3Sigma is that it has a lower tolerance for anomalies, while the absolute median difference theoretically has a better tolerance for anomalies, so when the data presents a highly symmetrical distribution, the absolute median difference (MAD ) instead of 3Sigma for detection. We use different detection algorithms for the distribution of different data (for the principles of different algorithms, please refer to the appendix at the end of the article, and we will not elaborate too much here):

With the above analysis, we can draw the specific process of outputting the model according to the sample: 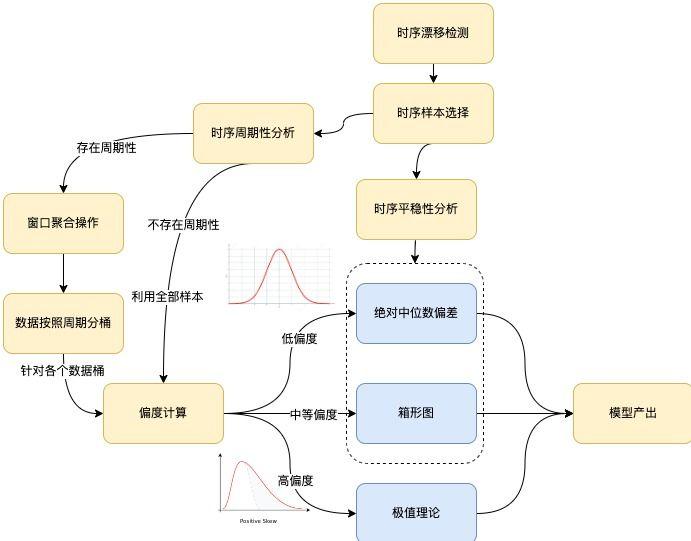 The overall modeling process of the algorithm is shown in the figure above, which mainly covers the following branches: time series drift detection, time series stationarity analysis, time series periodic analysis and skewness calculation. The following are respectively introduced:

A case is selected here to show the data analysis and modeling process to facilitate a clearer understanding of the above process. Figure (a) is the original sequence, Figure (b) is the sequence folded according to the span of days, Figure (c) is the enlarged trend performance of the samples in a certain time index interval in Figure (b), Figure (d) ) in the black curve is the lower threshold corresponding to the time index in Figure (c). The following is an example of modeling historical samples of a certain time series: 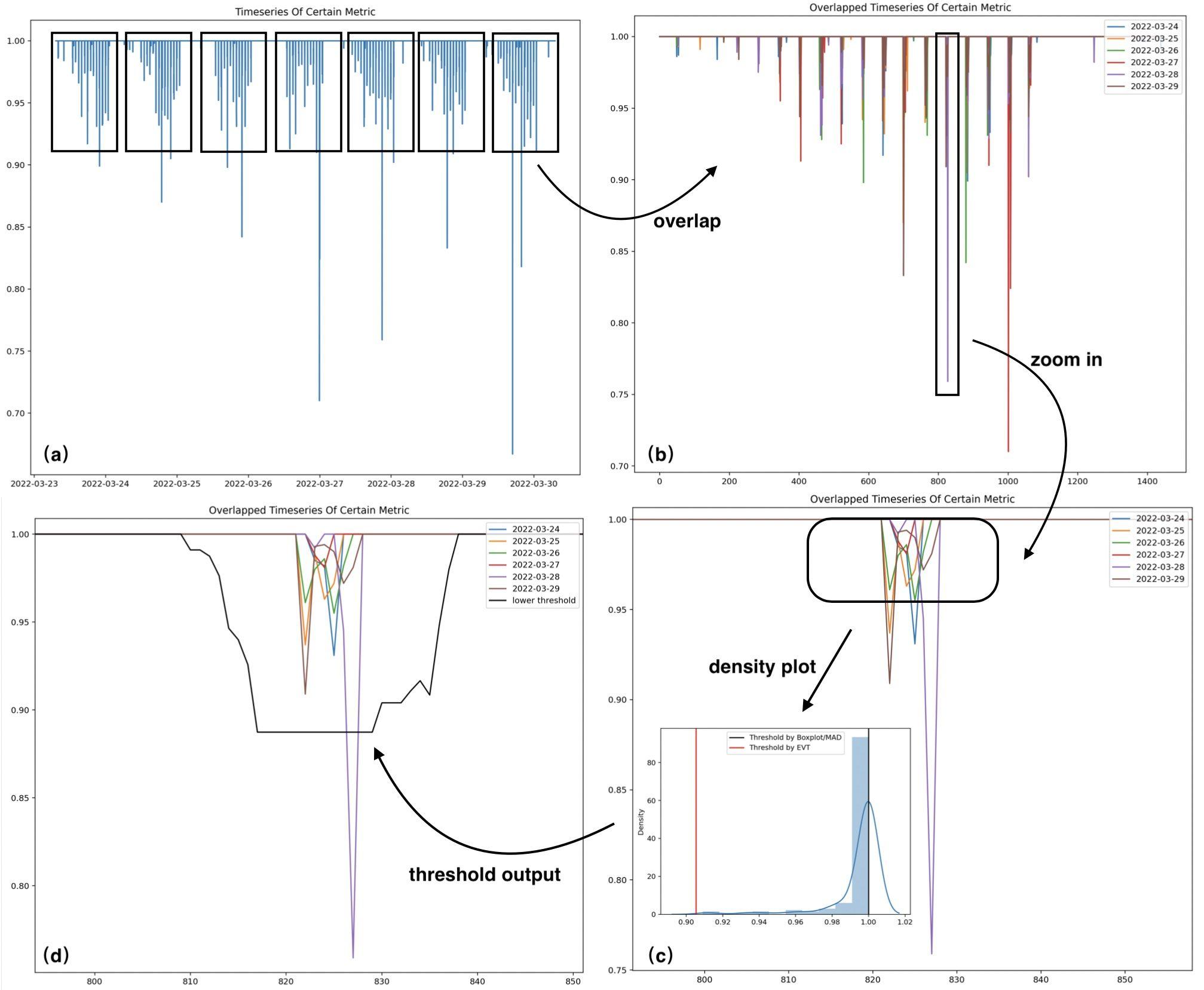 The sample distribution histogram and threshold (some abnormal samples have been removed) in the area (c) above, we can see that in this highly skewed distribution scenario, the threshold calculated by the EVT algorithm is more reasonable. 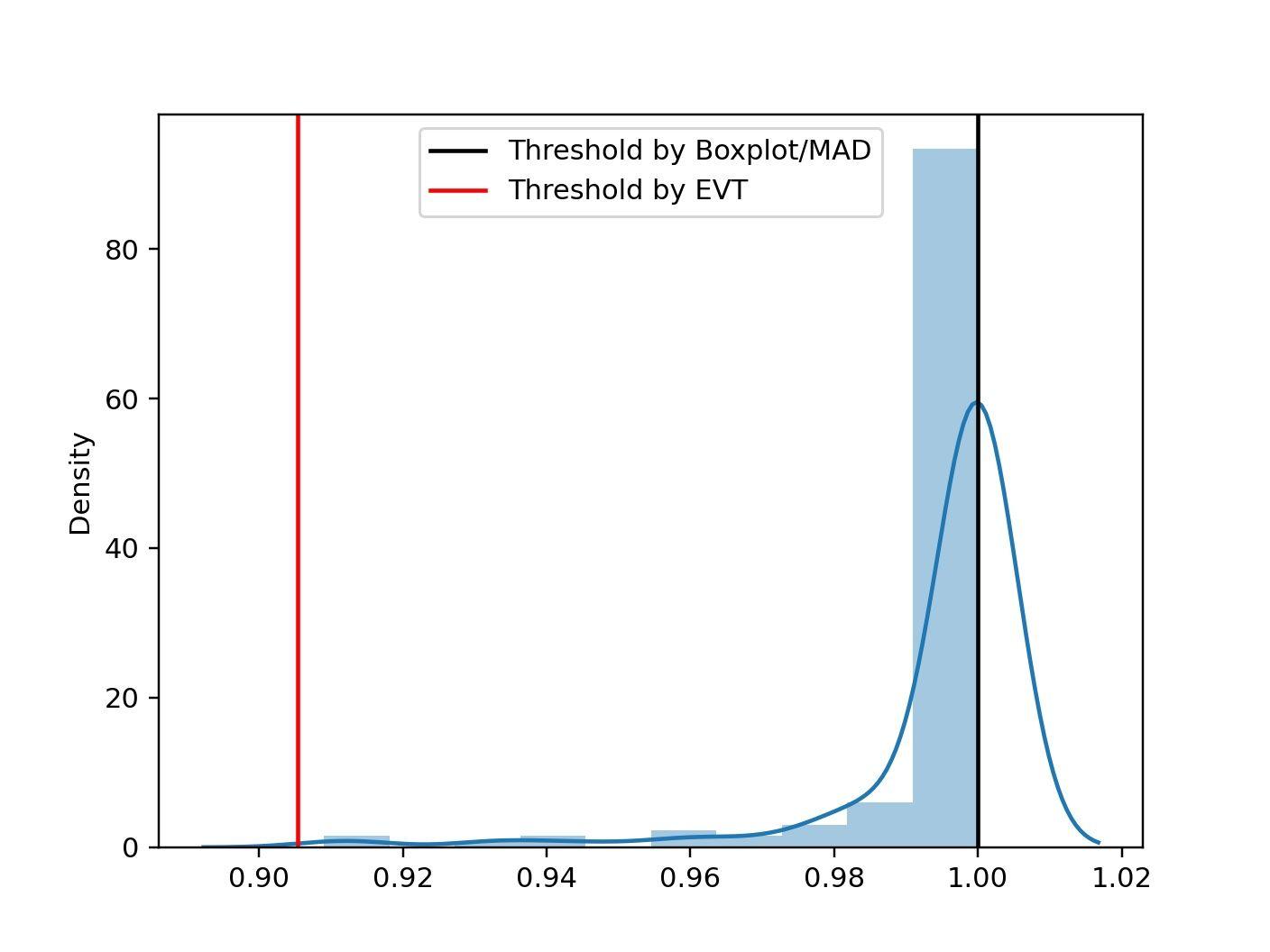 In order to detect large-scale second-level data in real time, we designed the following technical solutions based on Flink-based real-time stream processing:

The following is the specific offline training and online detection technology design:

The anomaly detection algorithm adopts the divide-and-conquer idea as a whole. In the model training stage, features are identified and extracted according to historical data, and an appropriate detection algorithm is selected. This is divided into two parts: offline training and online detection. Offline mainly performs data preprocessing, time series classification and time series modeling according to historical conditions. Online mainly loads models that use offline training for online real-time anomaly detection. The specific design is shown in the following figure: 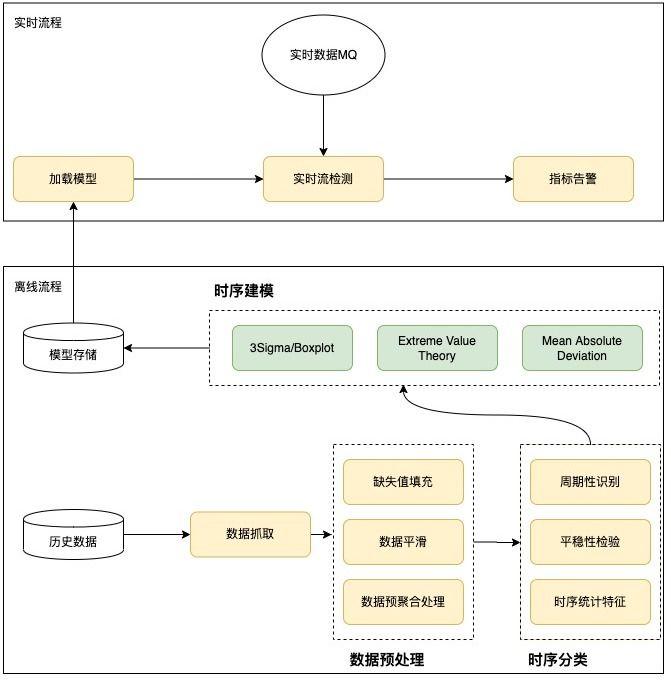 In order to improve the efficiency of optimizing the iterative algorithm and continue to operate to improve the accuracy and recall rate, we use the case backtracking capability of Horae (Horae is a scalable time series data anomaly detection system within Meituan) to achieve online detection, case preservation, analysis and optimization. , result evaluation, release and online closed loop. 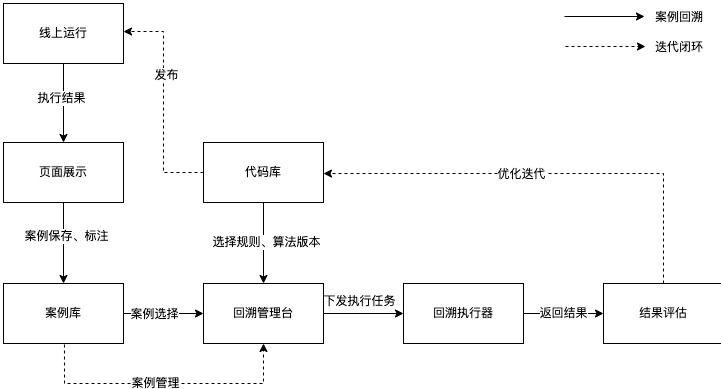 Currently, the anomaly detection algorithm indicators are as follows:

At present, Meituan's database anomaly monitoring capabilities have been basically built, and we will continue to optimize and expand the product in the future. The specific directions include:

The absolute median deviation, or Median Absolute Deviation (MAD), is a robust measure of the sample deviation of univariate numerical data [6] , and is usually calculated as:

Among them, when the prior is a normal distribution, generally C is 1.4826, and k is 3. MAD assumes that the middle 50% of the samples are normal samples, and the abnormal samples fall within the 50% of the two sides. When the samples are normally distributed, the MAD indicator can better adapt to the outliers in the data set than the standard deviation. For the standard deviation, the square of the distance from the data to the mean is used. The larger the deviation, the greater the weight. The influence of outliers on the results cannot be ignored. For MAD, a small amount of outliers will not affect the experimental results. normality has higher requirements.

The box plot mainly describes the degree of dispersion and symmetry of the sample distribution through several statistics, including: 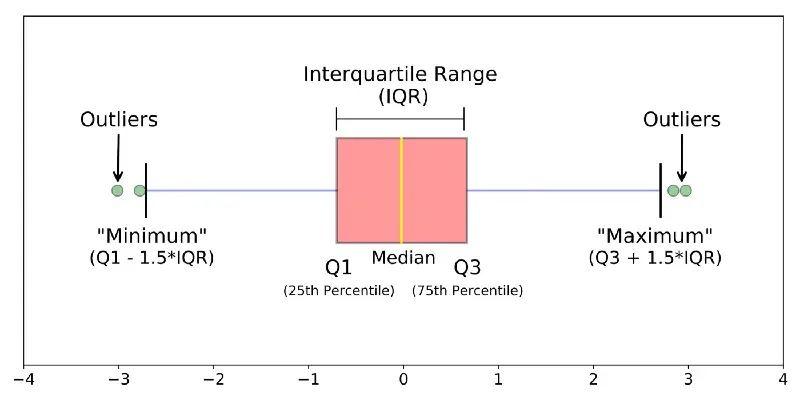 The distance between Q 1 and Q 3 is called the IQR, and when the sample deviates by 1.5 times the IQR of the upper quartile (or 1.5 times the IQR of the lower quartile), the sample is regarded as a distance. group point. Unlike the three times standard deviation based on the normality assumption, in general, the box plot has no assumptions about the potential data distribution of the sample, can describe the discrete situation of the sample, and has a higher probability of the potential abnormal samples contained in the sample. tolerance. For biased data, Boxplot is more consistent with the data distribution after calibration [7] .

Among them, t represents the empirical threshold of the sample. Different values can be set for different scenarios. $\gamma$ and $\delta$ are the shape parameters and scale parameters in the generalized Pareto distribution, respectively. When the given sample exceeds the artificially set value In the case of the empirical threshold t, the random variable Xt obeys the generalized Pareto distribution. Through the maximum likelihood estimation method, we can obtain the parameter estimates $\hat{\gamma}$ and $\hat{\delta}$, and calculate the model threshold by the following formula:

| This article is produced by Meituan technical team, and the copyright belongs to Meituan. Welcome to reprint or use the content of this article for non-commercial purposes such as sharing and communication, please indicate "The content is reproduced from the Meituan technical team". This article may not be reproduced or used commercially without permission. For any commercial activities, please send an email to [email protected] to apply for authorization.